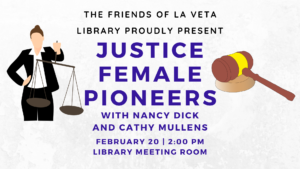 Nancy Dick is best known as Colorado’s first female Lieutenant Governor but before that historic role she served in the Colorado House of Representatives from 1975 to 1979. Representative Dick, a Democrat, was from Aspen and represented five counties on the Western Slope. She attended law school at the University of Denver while serving in the state legislature.In 1975 and 1976, Rep. Dick was the vice-chair of the Transportation and Energy committee. She also served as the vice-chair of the interim committee on the Equal Rights Amendment.She went on to become Lieutenant Governor from 1979 to 1987, serving with Governor Richard Lamm.

Some may know that Cathy Mullens is the municipal judge in La Veta, but they probably don’t know that in 1992 she broke one of the glass ceilings in her profession. Mullens, a law school graduate of Campbell University in Raleigh, N.C., ran for District Attorney in the 12th Judicial District, the San Luis Valley, & won – becoming the first woman to be elected as a District Attorney in the state. Mullens did her undergraduate work at Adams State College in Alamosa & returned there to work as a Deputy District Attorney in 1985. She continued to serve as a prosecutor & served in the First Judicial District, in Golden, CO, the Third J.D., which is comprised of Huerfano & Las Animas counties, & retired 10 years ago after serving as a Chief Deputy D.A. in the 10th J.D., Pueblo County

The event is finished.